The firm is proud to announce that Case Manager, Courtney Haug, has been inducted into the 2018 Mid-East Career and Technology Centers Distinguished Alumni Hall of Fame:

Courtney is a 2001 graduate of the (then) Medical Legal Program and John Glenn High School. During her senior year she was hired as an assistant at (then) Stubbins, Watson & Erhard Co., L.P.A. By the summer of 2001 she became Attorney Mark Watson’s Estate Planning Assistant. By the end of 2001 she was also Attorney Michael Bryan’s assistant as well. Over the past 17 years she has trained new staff, handled the case loads of up to three attorneys at once, and graduated from legal assistant to Case Manager.

In the community, Courtney is a strong supporter of 4H and is the organizational adviser of The All American Misfits 4H Club in Guernsey County, where her club has grown from five members to over 30. She has served on various 4H committees including: Dairy Goat Livestock Committee, Poultry Livestock Committee, Rabbit Livestock Committee, and 4H Council. She has also been a speaker at the Ohio 4H Conference in Columbus for the past three years.

Courtney says, “The best thing about Mid-East is that every child that enters the door is given the same opportunity for success. The faculty at Mid-East ensures that their students are provided with the tools to excel. It is a privilege to be recognized for my career success as well as show students that Mid-East was a part of that success.” 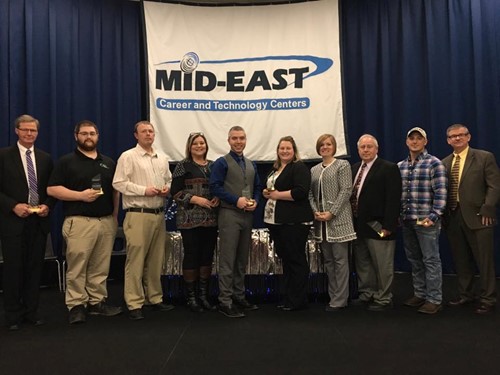